What Do Your Nails Say About Your Health? | Triad Foot & Ankle Center

Request an Appointment
Get Social!

What Do Your Nails Say About Your Health? 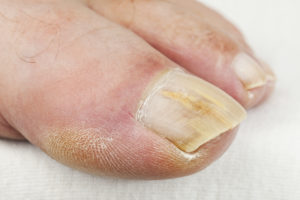 If you like to look down and see a little color at the end of your toes, you’re not alone: last year more than 104 million American women dressed up with nail polish. But if your toenails have started turning colors all on their own you may be looking at evidence of a medical problem. Here’s a guide to what your colorful toenails may be trying to tell you.

Black toenail: If one of your toenails turns black chances are you have stubbed your toe, dropped something heavy on your foot, or are wearing too-tight shoes causing blistering and bruising under the nail (the technical term is subungual hematoma). A bruise will generally start out red and swollen and then go through all the usual bruise colors ending in black; depending on how fast your nails grow it can take as much as nine months for the black nail to be replaced with a normal nail.

If, however, your black nail doesn’t change color and you don’t see new growth coming in you might be looking at other problems, some of them serious, some not so bad. The top of the “not-so-bad list” is a fungal infection, generally treatable with better foot hygiene and over-the-counter remedies (fungal infections usually cause nails to turn yellow or white, but a build-up of debris under the infected nail can make it appear dark). Less common but important to take seriously, a black nail can also be a sign of melanoma, an aggressive form of skin cancer. If you have a black toenail that can’t be explained by any of the other causes above have it checked out by your doctor.

Brown toenails: Yellowy-brown toenails can be caused by micro-trauma or be a sign of a fungal infection, particularly if the nails are also flaky or crumbly. Fungus loves moist, dark, confined environments (a.k.a. your shoes), so it’s important to keep your feet clean and dry, wear fresh socks every day, air your feet out regularly, and protect your feet with pool shoes or flipflops in shared showers, locker rooms, and even hotel rooms.

Yellow toenails:  Once again, fungus is probably to blame. The fungus that turns nails yellow can also cause nails to thicken which can make home treatment more difficult. If you are applying an anti-fungal cream to a thickened nail gently file the nail down first to allow the cream to penetrate. A word of caution: while the fungal infection is by far the most common cause of yellow toenails don’t be too hasty to dismiss other possibilities. Yellow nails that don’t respond to treatment may be a sign of an underlying medical condition—rheumatoid arthritis, psoriasis, or a rare form of lymphedema known (appropriately) as Yellow Nail Syndrome.

Green toenails: Green toenails have a medical name of their own: chloronychia or Green Nail Syndrome. Green nails are generally caused by a particular type of bacterial infection and occur most often in people whose feet are frequently submerged in water, especially water with soap or detergent. The bacteria that causes the syndrome finds its way into the nail bed through slight separations of the nail and bed; your best treatment is a course of antibiotics, taken orally or applied topically, and keeping the nails trimmed close.

Blue toenails: Anyone who has ever stubbed a toe badly knows what it looks like to have the whole nail change color, but a single spot of blue, especially if you can’t remember any trauma to your toe, can be disconcerting. Most likely the culprit is a harmless mole under the nail, but it could be a blue nevus, a type of mole that can lead to cancer. If you are concerned about the appearance of the blue spot and especially if you are over 30 it’s best to consult your doctor. On the other hand, an overall blue tinge to toenails and fingernails could be a signal that your body isn’t getting enough oxygen, possibly because of a lung condition or because of a medication you’re taking. Either way, it’s important to look into it.

White toenails: White nails can have a wide variety of causes. It could be a highly contagious fungus called white superficial onychomycosis that occurs most often in people with weakened immune systems. The treatment is the same as for any other kind of fungus—good foot hygiene and over-the-counter medications—but left untreated the nail can grow painfully thick and can even eventually come off. The white patches could also stem from an injury that has caused a portion of the nail to separate from the nail bed, but if your whole nail is pale white and appears otherwise healthy it could be a sign of underlying liver disease, especially hepatitis; congestive heart failure; or rheumatoid arthritis. Talk to your doctor.

Stripes: Toenail color can show up as distinct stripes, either vertical or horizontal, that should always be taken seriously. A pattern of red and white vertical stripes, particularly when accompanied by v-shaped nicks in the growing edge of the nail, is commonly a sign of Darier disease, an inherited condition that also causes skin problems. If your nails are pale with just a horizontal pink stripe at the tip you should also pay attention—known as “Terry’s nails” your toenails could be a warning of liver disease, kidney failure, or congestive heart failure.

If you have concerns and want an in-depth reading of your toenails and what they have to say about the health of your feet and the rest of your body make an appointment to see your podiatrist for an evaluation. Triad Foot & Ankle Center has three convenient locations to serve your foot and ankle care needs. Request an appointment today.

Disclaimer: The information and other content provided in our blogs, videos, or in any other content or linked materials are not intended and should not be construed as medical advice, nor is the information a substitute for professional medical expertise or treatment. For a full disclaimer, please click here.

Have a Black Toenail? Here are 3 Reasons Why…

Do You Have a Fungal Nail Infection?

Should I Be Worried About My Child’s Foot Health?

For more information about foot health Request an Appointment today!